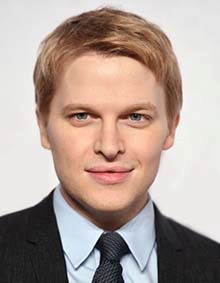 Free tickets will be available for graduate students starting on March 11th at the SBI Ticket Offices (221 Student Union and 135 Diefendorf Hall).  1 per UB ID.

Ronan Farrow was awarded the 2018 Pulitzer Prize for Public Service and named to TIME’s “100 Most Influential People of 2018” for his culture-shifting reporting for The New Yorker on Harvey Weinstein, sexual harassment and abuse of power. Awarded along with Megan Twohey and Jodi Kantor of The New York Times, the Pulitzer Prize committee recognized Farrow’s, “explosive, impactful journalism… spurring a worldwide reckoning about sexual abuse of women,” and as the TIME tribute cited, “Their hard work and impeccable journalism have changed attitudes, behavior, conversations, norms, laws and policies, yielding enormous personal and public good.”

Beyond his groundbreaking work with The New Yorker, Farrow has been an anchor and reporter at MSNBC and NBC News, and his writing has appeared in publications including The Wall Street Journal and The Washington Post. In early 2018, Farrow signed an exclusive three-year deal with HBO to develop and be featured in a series of investigative documentary specials. In spring 2018, he released a book titled “War on Peace: The End of Diplomacy and the Decline of American Influence.” The book was an instant Amazon and New York Times #1 Bestseller.

Farrow formerly served as a State Department diplomat in Afghanistan and Pakistan, and reported to Secretary of State Hillary Clinton as the United States’ first special adviser for global youth during the Arab Spring revolutions. Farrow is a Yale Law School educated attorney who has specialized in human rights, and he attended Oxford University as a Rhodes Scholar.