Why do people do what they do? Because of what happens to them when they do it.

Richard S. Gold, president and chief operating officer of M&T Bank, recently shared this concept and deeper insights on behavior science as part of the Leaders on Leadership Speaker Series, hosted by the University at Buffalo School of Management’s Center for Leadership and Organizational Effectiveness.

At the event, Gold explained the ABC Model of behavior and how leaders can use it to motivate individuals and teams for above-and-beyond performance. The ABC in the model stands for:

Gold said the speech President John F. Kennedy delivered at Rice Stadium in Houston on Sept. 12, 1962, was an example of a powerful antecedent for a national effort to land a man on the moon. The speech was so compelling and emotional that even after Kennedy’s assassination, the effort pushed forward and the first man walked on the moon in 1969. Below is an excerpt from that speech: 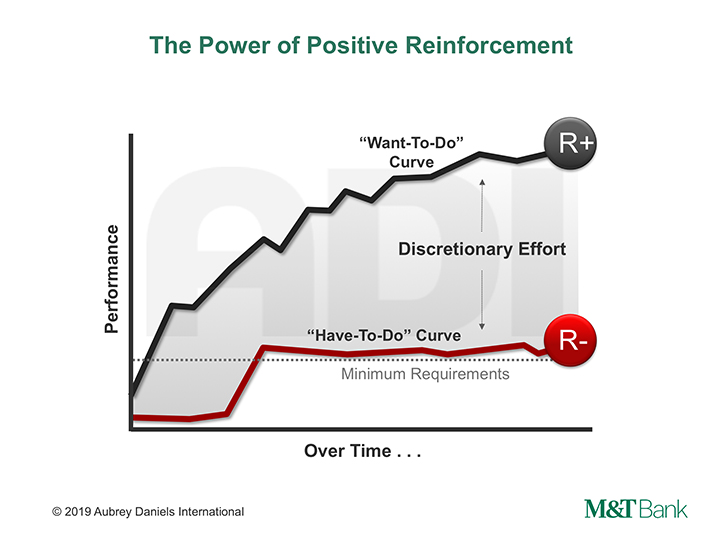 When a manager uses negative reinforcement, employees end up on the “have to do” track, where they expend the minimum effort needed to fulfill their duties and avoid the “or else” part of their manager’s ultimatum. Positive reinforcement, however, is the key to unlocking discretionary effort and getting your employees on a “want to do” track, where they go above and beyond — even when you’re not looking.

Gold said by following these four steps, every manager can become an effective leader:

Richard S. Gold is president and chief operating officer of M&T and its principal banking subsidiary, M&T Bank. He was named to this position, and to the board of directors of both M&T and M&T Bank, in December 2017. Gold began his career with M&T Bank in 1989 as an executive associate and has served in a number of management positions in retail banking and business banking, mortgage and consumer lending and marketing. In 2014, he was named vice chairman and took on the role of chief risk officer.

Gold earned a bachelor’s degree from Cornell University School of Industrial and Labor Relations and an MBA from New York University Stern School of Business. He is an adjunct professor in the University at Buffalo School of Management.

One Reply to “Four powerful tips for effective leadership”

Leadership in the UB School of Management