I’ve finally found a moment to collect my thoughts and update you all on what’s been going on over here, in Germany. I apologize for being M.I.A. for a while!

The past four weeks or so have been filled with many great, annoying, scary and weird experiences, and I wanted to highlight and share some of them here before I publish my next post about my trip to Amsterdam and London.

Event 1:  I was actually really sick with a bad cold and fever (about three weeks ago) and had to stay home for the entire week unfortunately. However, I 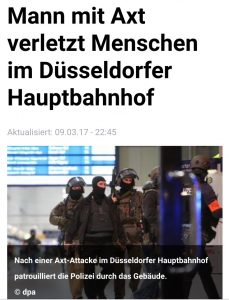 think my body and brain really needed the break and everyone at my internship was completely understanding and willing to help with anything that I needed.

Event 2: A man with an ax attacked several people at the main train station, here in Duesseldorf and an old WWII bomb was found in the middle of the city. Both events happened back to back and the city (and that week) was completely chaotic but fortunately, no one was died and things settled down quickly after the man was found and the bomb was deactivated.

Event 3: I’ve been slowly taking on more responsibility in regards to the consultations that we provide for the asylum seekers in the shelters each week and I have had more opportunities to serve as an interpreter as well. Although I have been constantly learning since January, I still feel as if there is so much to learn but I believe my co workers are right when they say that the best way to become good at this job is to just do it because it is impossible to learn everything and be prepared for every single situation beforehand. So, I will keep trying to be bold and brave when calling up these lawyers, insurance companies and social service agencies! In regards to the interpreting, I have to point out that it is much harder than it looks! Last week, two men from Albania showed up at the main shelter I work at asking the security if they could stay the night. Our security asked me if I could explain to them how this shelter works with admitting people and where they may be able to go on such a short notice (I knew nothing about both matters at that time). Also, this past Wednesday, a father from Iraq who spoke English came in to the consultations to have us help him fill out a form that he had received from the police station concerning his son. He told us what happened, we had to write the story for him in German, and in the end, I translated his statement back to him and then he confirmed that everything was correct.

Event 4: It’s spring!!! The winter is definitely over in Germany and it is so nice to enjoy a real spring when it is actually the spring season. There was one really nice day last week and my coworker insisted that we sit outside and take pictures, so that’s why I’ve included this random picture of me in front of flowers. I’ve also been trying to see more of Duesseldorf when I can and spend time outside. I’m glad I’ve made some time lately because I found a piece of the Berlin wall here and this cute bench! 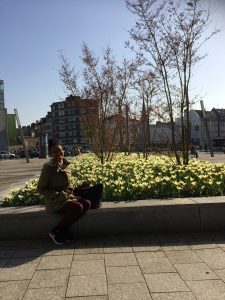 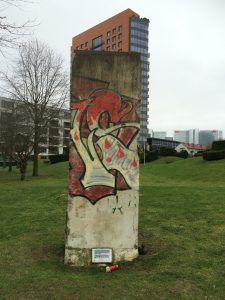 A piece of the Berlin Wall 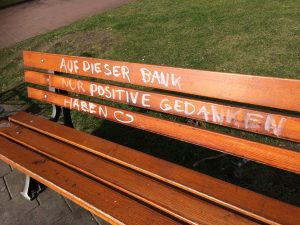 “On this bench you can only have positive thoughts” 🙂