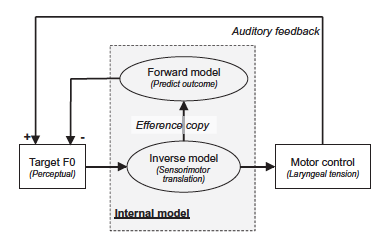 Most people claim an inability to sing, and at least a small percentage of the population may literally be correct. People who are unable to imitate melodies vocally (i.e. sing), are typically called “tone deaf” but are such persons — as the term implies — literally unable to perceive differences in pitch? This line of research explores individual differences in vocal imitation during singing and speaking. With respect to singing, not much is known about the actual performances of so-called “tone deaf” persons and our behavioral studies examine empirically what exactly is “bad” about “bad” singing. Furthermore, we are comparing vocal imitation of pitch during singing with imitation in speech, to probe the degree to which each behavior relies on common mechanisms.

Theoretical goals of this research include understanding the cognitive and neural bases of vocal imitation (a particularly difficult imitative task considering that one cannot see the actions one imitates), the degree to which the imitation of song versus speech are guided by similar mechanisms, as well as the degree to which deficits in production are related to concomitant deficits in perception.

Applied goals of this research include developing educational practices to help alleviate bad singing and to gauge whether people are generally as bad as they think they are at this task.