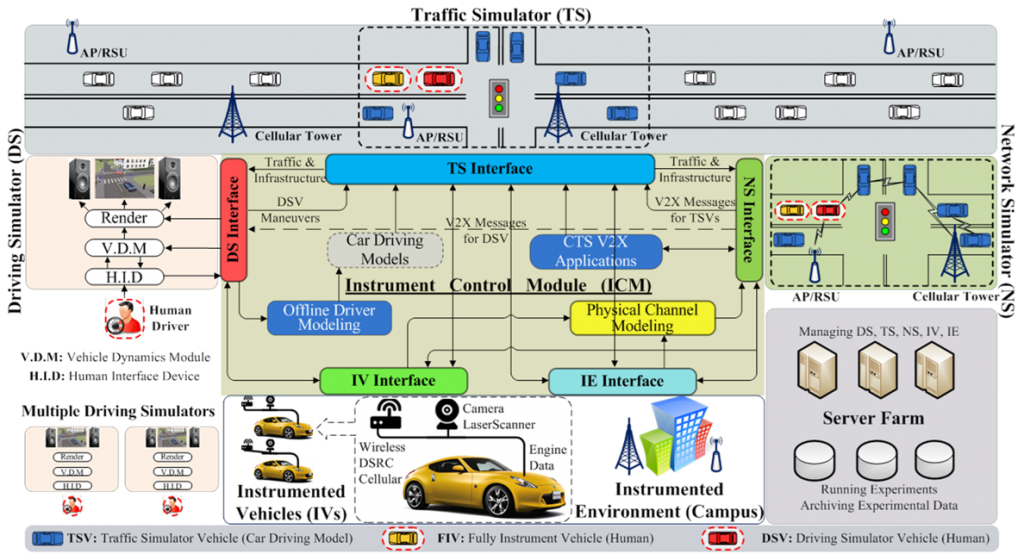 Currently, there exist a few simulation tools for AVs. One of the most advanced platforms is perhaps Waymo’s Simulation Platform, which is reported to be able to simulate thousands of self-driving cars in a realistic virtual environment. However, the detailed working of the system is not publicly known and the platform is not available outside Waymo. Another interesting system is the NVIDIA DRIVE™ Constellation AV simulator, which reportedly can simulate the sensors of a self-driving vehicle to generate photorealistic data streams to create a wide range of testing environments and scenarios. One of the limitations of this system is that it can test the autonomous vehicle systems built on the NVIDIA DRIVE™ platform only. Another commercial solution is rFpro Driving Simulator. It can be used to simulate feeds to multiple sensors, such as cameras, radars, and LiDAR. However, as most of the existing platforms, it is also not capable of simulating wireless communications, and connected and autonomous vehicle applications.  There are also a few open source simulation platforms. For example, the CARLA Simulator provides open-source code and protocols, open digital assets (urban layouts, buildings, vehicles) and two kind of sensors: cameras and simple Lidars, Unfortunately, it lacks abilities for traffic and network simulations. As mentioned earlier, none of the existing platforms and works has defined or developed any testing scenarios, performance metrics and scoring rubrics needed for benchmarking and standardization purposes.
One promising approach to testing, evaluating and certifying AVs is to leverage the unique iCAVE platform being developed at UB, which is an integrated VR-based 5-in-1 instrument, with both hardware- and human-in-the-loop. The iCAVE consists of: (1) Multiple driving simulators to conduct human/hardware-in-the-loop experiments; (2) a microscopic agent-based  traffic simulator with realistic traffic models and simulated driving environment; (3) a Network Simulator with realistic wireless communication models; (4) several instrumented vehicles, including a self-driving shuttle (the Olli bus) and UB’s Lincoln MKZ’s AV platform with sensor packages supporting both open source software called Autoware and Apollo; and (5) an instrumented environment with various traffic sensors and road-side units. Compared to road testing, iCAVE provides a safe and realistic environment enabling many “what-if” questions pertaining to futuristic and unproven AV technologies, and is also more flexible, has a lower cost, and supports larger-scale evaluation.