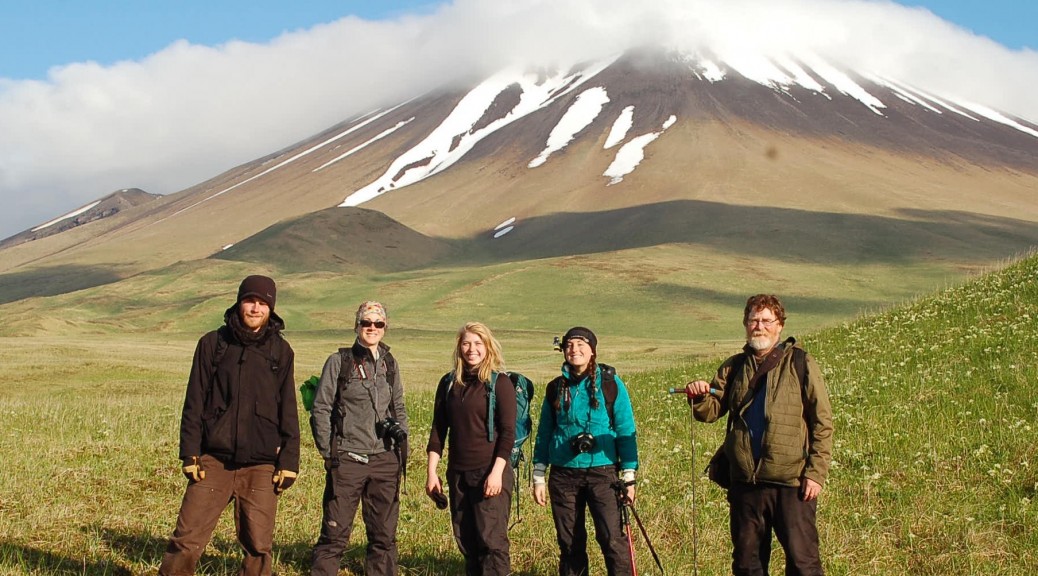 The Rat Islands Research Project (2014-2017) focused on understanding long-term human and environmental histories. Our team of bio-, geo- and social scientists worked together in the Rat Islands group of the Aleutian Islands, Alaska. We specialize in different aspects of the terrestrial, marine, and human environments. For the Rat Islands project, we shared a common research goal among our diverse approaches.

People, plants, and animals impacted one another in the Rat Islands over the past 6,000 years. All of them were impacted by large-scale geological events and climate change. Our interdisciplinary data allow us to begin to understand nodes of impact: times, places, and variables when intersections and change can be identified.

The archaeologists in focusing on growing our understanding of the history of ancestral Unangan/Aleut lives in the Rat Islands. We learned about the past through archaeological survey, identifying places where people lived for the past 6,000 years. These places include villages of five to thirty houses and smaller places with only one or two semi-subterranean features. Our test excavations into village midden sites and other features provided us with data about ancestral lives and the ancient environment.

Our pollen/plant macrofossil specialist recorded observations of modern plant communities to compare with subsurface core data. The subsurface cores provide a record of prehistoric plant sequences which are used to understand climate change, impact from volcanic eruptions, and potential human impact on natural plant distributions. The cores also give our geologist data about the history and composition of tephras.

The team biologists collaborated to study regional intertidal and marine ecologies over time. Our marine biologist surveyed the intertidal zone, sampling species and quantifying their proportions and size. His data contribute to regional marine foodweb models, linked to North Pacific models. Our archaeologist/biologist performed isotope analysis (δ13C and δ15N of organic fraction) of modern marine specimens and of animal remains from archaeological sites. Her work places organisms relative to one another in a trophic system and provides data about possible fluctuations in primary productivity and/or foraging location of species represented in middens, and changes in human hunting grounds through time and shifting climatic regimes.

The Importance of the Research

Policies developed to mitigate and adapt to the effects of climate and ecosystem change around the world do not account for the potentially transformative, long-term history of human impact on ecosystems in the North. They assume that human impacts in general are a relatively recent global development and that they are only three centuries old in the Aleutians. Recent developments in multidisciplinary prehistory projects indicate that small-scale societies also can cause notable and permanent change in ecosystems.

Researching human and environmental intersections in the Aleutian Islands.