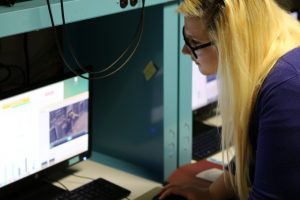 Hearing in Mice: Mice (Mus musculus) have become important models in the study of hearing, and the number and variety of genetically engineered mouse strains makes them ideal models for studies of deafness. However, auditory studies using awake and behaving mice are scarce. For this reason, we study the hearing abilities of mice using operant conditioning techniques. We have measured audiograms, temporal resolution, amplitude resolution, and the perception of complex stimuli by normal hearing and cannabinoid receptor knockout mice. We are also comparing hearing by male and female, young and old, and noise exposed mice. Finally, we are determining the effects of various levels and time courses of noise exposures on tinnitus. 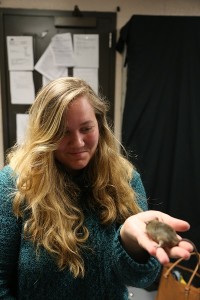 Ultrasonic Vocalization Production, Preference, and Perception by Mice: Several studies have shown that house mice reliably emit ultrasonic vocalizations (USVs) in a variety of situations, especially during non-aggressive interactions such as courtship. Vocal signals have been thought to play an important communicative role in facilitating or inhibiting social interactions involved in reproductive behavior in other species of animals, but little is known about the role of these vocalizations in mice. Historically, the majority of experiments measuring vocalizations in mice have been conducted on male mice during male-female dyadic interactions. Our lab is focusing on the female-emitted USVs during these social/ investigative experiences in an attempt to test the functional significances, if any, of the female-emitted USVs. We are also trying to determine what features of mouse USVs are important in preference studies. Finally, we are trying to determine if various USVs fit into categories, much like human words or bird calls, in psychoacoustic studies. 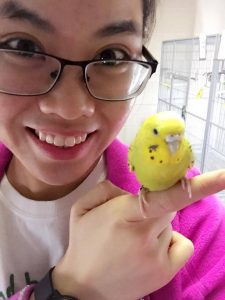 Hearing in Birds: The ability of an organism to hear and gather information from sounds in the environment is crucial to its survival and reproductive success. We study two species of birds, zebra finches (Taeniopygia guttata) and budgerigars (Melopsittacus undulatus), in both simple and complex listening environments. Auditory illusions, such as the Franssen illusion, offer a unique chance to investigate both when and why listeners mistakenly localize a sound source in the free-field. Similarly, it is also important to investigate the precise ITD and ILD cues that birds might be using for source localization. By fitting our birds with headphones, we can precisely control the information presented to each ear in order to determine their sensitivities to binaural cues. We also study the cocktail party problem in birds by asking them to identify various complex signals in different types of maskers emitted from various spatial locations to get a better idea of how they navigate in the real world. We are also interested in the auditory cues, such as amplitude and reverberation, which birds use to estimate the distance to a sound source. 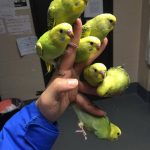 The Role of Cognitive Processes in Hearing in Birds: Another avenue of research in our laboratory involves looking at the roles of attention, streaming, perceptual filling-in, auditory capture, and categorization in determining what birds do when faced with brand new auditory stimuli that do not fall into already-known acoustic categories. For instance, we conduct a variety of complex sound perception tasks that investigate how budgerigars and zebra finches classify or group various complex stimuli based on only partial information (or information coming from disparate locations in space). The extent to which the listeners group-together or separate auditory events, for instance, may provide useful information in determining how the brains of these organisms naturally divide auditory events. Looking at situations that can cause decrements in performance for the birds may also offer unique insights on the natural capacity of these species to attend to and perceive various stimuli in their environments.