The Dominican Republic is a nation on the island of Hispaniola, part of the Greater Antilles archipelago in the Caribbean region. The western three-eighths of the island is occupied by the nation of Haiti, making Hispaniola one of two Caribbean islands, along with Saint Martin, that are shared by two countries. Both by area and population, the Dominican Republic is the second-largest Caribbean nation (after Cuba), with 48,445 square kilometres (18,705 sq mi) and nearly 10 million people, one million of which live in the capital city, Santo Domingo. 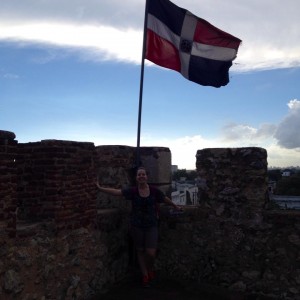 Christopher Columbus landed on the island in 1492, which the Taíno people had inhabited since the 7th century. It became the site of the first permanent European settlement in the Americas; namely Santo Domingo, the oldest continuously inhabited city and the first seat of the Spanish colonial rule in the New World. After three centuries of Spanish rule, with French and Haitian interludes, the country became independent in 1821. The ruler, José Núñez de Cáceres, intended that the Dominican Republic be part of the nation of Gran Colombia, but he was quickly removed by the Haitian government and Dominican slave revolts. Victorious in the Dominican War of Independence against Haitian rule in 1844, the Dominican Republic over the next 72 years, experienced mostly internal strife and encountered a brief return to colonial status under Spanish rule proposed by general Pedro Santana, becoming the only nation in the hemisphere to do so after gaining its independence. The United States occupation lasted eight years between 1916–1924, and a subsequent calm and prosperous six-year period under Horacio Vásquez Lajara, were followed by the dictatorship of Rafael Leónidas Trujillo Molina until 1961. The civil war of 1965, the country’s last, was ended by a U.S.-led intervention, and was followed by the authoritarian rule of Joaquín Balaguer, 1966–1978. Since then, the Dominican Republic has moved toward representative democracy, and has been led by Leonel Fernández for most of the time after 1996. Danilo Medina, the Dominican Republic’s current president, succeeded Fernández in 2012, winning 51% of the electoral vote over his opponent ex-president Hipólito Mejía.

The Dominican Republic has the ninth largest economy in Latin America and is the largest economy in the Caribbean and Central American region. Though long known for agriculture and mining, the economy is now dominated by services. The country’s economic progress is exemplified by its advanced telecommunication system and transportation infrastructure. Nevertheless, unemployment, government corruption, and inconsistent electric service remain major Dominican problems. The country also has “marked income inequality”. International migration affects the Dominican Republic greatly, as it receives and sends large flows of migrants. Haitian immigration and the integration of Dominicans of Haitian descent are major issues. A large Dominican diaspora exists, mostly in the United States. They contribute to national development as they send billions of dollars to their families.

The Dominican Republic is the most visited destination in the Caribbean. The year-round golf courses are among the top attractions on the island. A geographically diverse nation, the Dominican Republic is home to the region’s tallest mountain peak, Pico Duarte, as well as the Caribbean’s largest lake and lowest elevation, Lake Enriquillo. The island has an average temperature of 26 °C (78.8 °F) and great climatic and biological diversity. The country is also the site of the first cathedral, castle, monastery, and fortress built in all of the Americas, located in Santo Domingo’s Colonial Zone, an area declared as a World Heritage Site by UNESCO. Music and sport are of great importance in the Dominican culture, with Merengue and Bachata as the national dance and music, and baseball as the favorite sport.