For my final post just a few days before my departure from Santo Domingo for the U.S., I 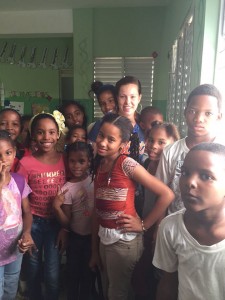 wanted to talk a little about my observations in relation to colonialism in the Dominican Republic, because it is something that I see as having a significant impact on society here. One of the primary observations I made, particularly during my time working in a school in Caballona, DR, a small town in an area in the western outskirts of Santo Domingo, is the obsession with the idea that white skin, light colored hair and eyes are superior to dark skin, hair and eyes. Nearly all of the ads in the malls, on the billboards, and on TV are filled with skinny, light haired, white skinned individuals, when in reality, a typical Dominican woman has caramel skin, brown eyes and hair, and a voluptuously curvy body frame. In addition, the story books for children, movies, and shows have blonde-haired, blue-eyed princesses. In my opinion, children internalize this type of message portrayed by media, and I saw this first hand as my students drew me pictures of blonde haired princesses with white skin and trees with apples, instead of avocado, orange, lemon, papaya, or cherry trees, which are only a handful of 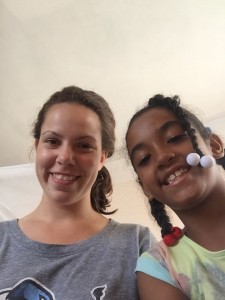 the natural resources that exist here on this beautiful Caribbean island. This is just another example of how globalization and colonization impact developing countries.

In addition, my students would constantly compliment me on my “beautiful” hair, which they constantly called a “blessing”, also my white skin, and light colored eyes. When I would tell them how beautiful they are with their caramel colored skin and curly hair, they would refuse and say no, no it’s ugly, yours is so much better. When I asked them why they never drew princesses with dark skin and hair, they would say the same, and it seemed as if the idea of a princess that isn’t white, European looking was something that had never even crossed their minds. They could not understand why I would even want them to draw me a brown-skinned princess. I not only saw this within my female students ages 11-14, but also with the family I lived with and my neighbors. I had a 9 year old neighbor who insisted on putting makeup and nail polish on me instead of herself, because she said it looks better with my perfect white skin, and although she was a beautiful young girl, she was convinced I was more beautiful simply because of my skin. 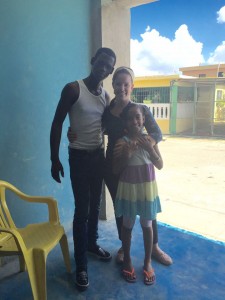 I am aware that this type of stereotype, the preference for white skin and light hair exits in the U.S. as well, but the U.S. is also going through a change, where exotic features, dark skin, natural hair, are more desirable than they were in the past. The U.S. also doesn’t have the history of bouncing back and forth under different colonial powers like DR does. In my opinion, the excessive influence of the U.S. on DR definitely has a significant impact on this facet of Dominican society, although globalization cannot be stopped. It is the role of society, and even more so, individual parents and families to build confidence, self-worth, and self-esteem within these young girls, not to teach them that their skin is not beautiful enough because it is not white. Having books and shows that children can relate to culturally are important for identity development and internal feelings of self-worth and self-esteem, which eventually impact external behavior, actions, and emotions.

Discussing and thinking about this topic makes me think of Chimamanda Ngozi Adichie, a Nigerian author that speaks on culture and feminism. One of her famous TedTalks was about the single story that people can have when thinking about culture and country differences. She tells a story about how she grew up writing stories and making drawings of light skinned people with light hair and eyes, and it was because she grew up in a country formerly colonized by the British, and therefore the stories, TV shows, and advertisements all included people that looked British, never those that looked Nigerian. She grew up only knowing these stories, until she was finally introduced to Chinua Achebe, a famous Nigerian author who told stories that were authentically African. From then on out, she began to develop her interest in writing and storytelling, moving on to write novels about Nigerian history and other stories that tell of her country and the issues her people have been through and continue to go through. This, to me, is why I find it to be important that children growing up in parts of the world such as formerly colonized Dominican Republic need literature about their country, written by people in their country, so that they can realize there is more beauty to the world than white people, that they are beautiful and have worth, just the same as any American or European child. Just as Chimamanda grew up not realizing her own beauty and worth in comparison to a white person, Dominican girls and children likely grow up with the mentality that their worth is below that of someone with white skin.

2 thoughts on “Effects of Colonialism and Globalization on Dominican Youth”