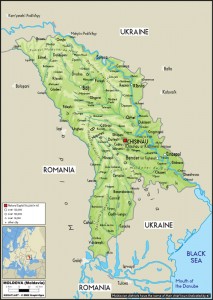 Sandwiched between Romania and Ukraine, Moldova emerged as an independent republic following the collapse of the Soviet Union in 1991. Comparatively, Moldova is slightly larger than the state of Maryland with a total area of 33,843 sq km (13,067 sq mi).

Moldova is one of the poorest countries in Europe, with its economy relying heavily on agriculture.

Most of what is now Moldova was the independent principality of Moldavia in the 14th century. In the 16th century, it came under Ottoman Turkish rule. Russia acquired Moldavian territory in 1791, and more in 1812 when Turkey gave up the province of Bessarabia—the area between the Prut and Dniester rivers—to Russia in the Treaty of Bucharest. Turkey held the rest of Moldavia but it was passed to Romania in 1918. Russia did not recognize the cession of this territory.

In 1924, the USSR established Moldavia as an Autonomous Soviet Socialist Republic. As a result of the Nazi-Soviet Nonaggression Pact of 1939, Romania was forced to cede all of Bessarabia to the Soviet Union in 1940. The Soviets merged the Moldavia ASSR with the Romanian-speaking districts of Bessarabia to form the Moldavian Soviet Socialist Republic. During World War II, Romania joined Germany in the attack on the Soviet Union and reconquered Bessarabia. But Soviet troops retook the territory in 1944 and reestablished the Moldavian SSR.

For many years, Romania and the USSR disputed each other’s territorial claims over Bessarabia. Following the aborted coup against Soviet president Mikhail Gorbachev, Moldavia proclaimed its independence in Sept. 1991 and changed its name to the Romanian spelling, Moldova.

Two-thirds of Moldovans are of Romanian descent. The languages are virtually identical and the two countries share a common cultural heritage. The most recent estimates indicate that the population is 64.5% Moldovan/Romanian; 13.8% Ukrainian; 13% Russian; 2% Bulgarian; 1.5% Jewish; and 5.2% Gagauz or other. The Gagauz are a Christian Turkic minority that live primarily in the south. The government estimates the number of Roma to be about 11,600; however, nongovernmental organizations have placed the estimated Romani population at anywhere between 20,000 and 200,000.

Romanian is the official language of Republic of Moldova. It is derived from Latin but, unlike the other Romance languages, preserved the neuter gender and a system of three cases. There are a large number of Slavonicderived words. Under Soviet rule the language was written in the Cyrillic alphabet, but Latin script was restored in 1989. This switch has caused problems, particularly in the separatist Transnistrian region where local authorities have closed schools that were teaching the Latin script.

Government officials are expected to know both Romanian and Russian.

Over 90% of the population belong to one of two Orthodox denominations: the Moldovan Orthodox or the Bessarabian Church. About 3.6% of the population belong to the Old Rite Russian Orthodox Church (Old Believers). Other Christian denominations include Roman Catholics, Baptists, Pentecostals, Seventh-Day Adventists, Jehovah’s Witnesses, Lutherans, Presbyterians, and Mormons. The Jewish community has about 31,300 members. There are also communities of Muslims and Baha’is. Though there is no state religion, the Moldovan Orthodox Church has a privileged status with the state and the government imposes some restrictions on religious groups that are not officially registered. For instance, unregistered groups are not permitted to build churches.