At my internship this week I met with the Communications Department and then with the Director of the Maharashtra Office later in the week. I was instructed to learn about the legislation that had promoted human rights in India. I was surprised to find out that a great deal were passed within the past 15 years. I think this shows that India is motivated at pushing child rights and that the country is making measurable progress. I believe if you support the people, the people will support the country. The progress shows that development is in process. I think the question is how to sustain the development being made? I think it is done by engaging the community with locally-based agencies like, Childline, who are able to continue to advocate and educate the public on their rights.

Right of Children to Free and Compulsory Education Act (2009)

Protection of Children from Sexual Acts (2012)

I also was asking a coworker at Childline more about the details of child marriage in India. According to the Prohibition of Child Marriage Act of 2006, a marriage is only legal if the woman is 18 years of age the man is at least 21 years of age. If the man and woman are younger than the specified age, everyone involved in the wedding including the guests, dance hall staff, the DJ, and anyone else who was a part of the illegal marriage will be jailed. Women who are a part of the illegal marriage will not be jailed because they are not seen as the decision maker in the household. India has a patriarchal society in which the man is seen as the sole decision maker, therefore women are not held responsible for their criminal actions or made to go to jail in this instance.

Also, in marriages in general, husbands have the right to change the FIRST and last name of their wife. In speaking with my coworker, she stated marriage is seen as a transaction, which the purpose is to gain or maintain status. People are expected by their village to marry within their religion, village, or caste. If they marry outside of their caste, village, or religion they are outcast or killed. In the Indian state, Gujurat there is a “Saota System” where two families will have their daughters marry into each others’ families, kind of like a trade-off. My coworker stated that the intent behind this “transaction” is to ensure that the daughters are taken care of appropriately and not abused or sexually harassed once they are married to the others’ family. If the daughter of one family is being abused by her married family, the daughter’s family can threaten to abuse or sexually harass the other family’s daughter as well. I thought this was interesting because it shows how prevalent the patriarchal ideal is, and the extremes families will go to make sure their daughters are not abused once they are married off.

The most common tradition of marriages is the dowry system where the bride will present a dowry in the form of money or more commonly, land. A less common tradition is an unsaid form of prostitution. The bride is married to the groom’s family, who in turn gives the bride’s family a token or land. My coworker said this is less common, but definable prostitution because it is completing a transaction by “selling” the daughter to a groom’s family.

This week has been very informative and interesting. I look forward to what I will learn next week as well. I was informed I will begin working in the “field” two days a week, and with administrators the other two days of my work week. See you next week!

Here are some pictures from my commute to my internship in the morning. Sorry they’re a bit blurry! The traffic is a little unpredictable in the morning in Mumbai! 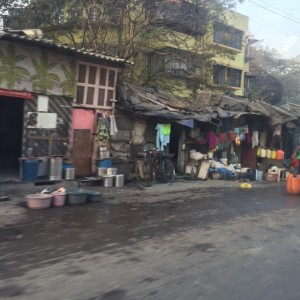 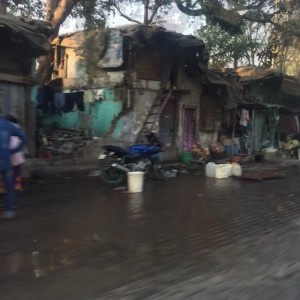