I started my internship at Childline this week and I’ll be working Monday through Thursday in an area of Mumbai called, Whorli. It’s a 1 to 2 hour commute one way depending on traffic, but I’m looking at it as an opportunity to take in the sights a bit. At my internship I’ve mostly just gone through orientation and established my role at the agency. I will be doing sight visits with the staff, as well as have the opportunity to travel with them to other states within India to shadow program evaluation and oversight of other locations. I’ll also be looking at their 2013-2014 annual report, and using their quantitative and qualitative data already gathered, to help identify how to target a larger audience for their service and innovate possible interventions to accomplish this.

At my internship this week we conducted a site visit at Childline’s Western Railway location. There were 3 staff working the kiosk, and they had a book for children to sign into when they 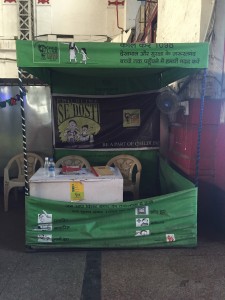 seek help from them. The staff said they usually get 30-40 children per month who ask for help from this specific. Often times the children get off the Western Railway train and go to them for help to find work. Most commonly the children at this kiosk are running away from home, in which they would sign into the book as “Runaway.” Children run away for a multitude of reasons, but often times because there are, what the staff identified as, “family problems.” Sometimes, the kiosk will also get a call from a child asking for a help if they are facing domestic violence, homelessness, etc. While we were conducting the site visit, the kiosk got a report for a child who was in the train station. Two of the staff walked together over to the child. After a child signs in or asks fo 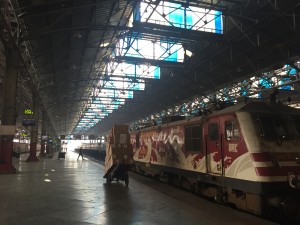 r help from the kiosk, the children will be seen by the Child Welfare Committee (CWC) and then placed with services or in a residential facility.

I went to the Foreigner’s Registration Office (FRRO) on Tuesday. Foreigners need to register within 14 days of entering the country. After half a day, it finally was done. It was a good example of the language barrier. I asked probably 6 people where the office was, and after waiting in the wrong location for over 2 hours, finally was redirected to the right place. In India, cab drivers and general directions aren’t given with road names or like traditional “western” directions. Directions usually sound like “take a right and go down the road that goes through.” I wasn’t sure what that meant, but these directions eventually got me to the FRRO building. The paperwork they gave you at the FRRO is what you need for them to allow you to exit the country when you fly home.

On the weekend I went to the Taj Mahal Hotel in Colaba, as well as the Sanjay Gandi National Park. At the park I went to the Khanheri Caves and on a tiger safari in the park. There was a Bollywood movie being filmed at the caves while I was visiting. That night I went to a French TISS student’s flat for a jam session. I 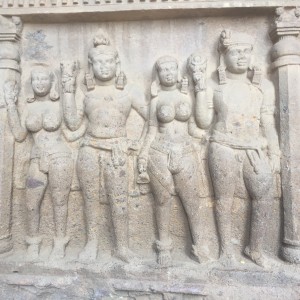 t was so much fun and it felt good to sing again. My roommate, Olivia, was there as well and she is also in a band back home in Vienna. I told her about my band Rustic Radio and we showed each other our music, and jammed a bunch of covers which domestic and international students. It was such a good time!

Also, when I need a moment of peace from the chaos of Mumbai, there is a coffee shop down the road from my flat called “Barista.” Its air conditioned, so I’ll go buy a coffee and read my Paulo Coelho or Jodi Picoult book for a couple hours.

There are monkeys EVERYWHERE. They’re the American equivalent of squirrels in regards to how common they are. I heard from a student that you shouldn’t look them in the eye because they see it as a sign of aggression and they will attack you. I also heard that they can smell fear so you should stay calm when you’re around them. But, I’m not sure I believe they can smell fear. I walked 10 miles in the Sanjay Gandi National Park with a banana in my backpack. They can smell fear but not the banana? It’s an old wives’ tale if you ask me!!

We also commonly run out of water in our flat. It happens mostly during the evening. As a result, I’ve officially taken my first bucket shower, which is how most Indians bathe because they don’t have traditional plumbing. I honestly think bucket showers are under rated! It wasn’t so bad! 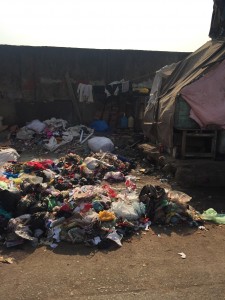 One of the major issues in Mumbai is the quality of housing. The majority of the those in Mumbai live in “slums” without running water or bathrooms. The nicer “neighborhoods” will share one public restroom facility with a women’s and men’s section. Some of the homes have electric, but they are directly on the street so often times you’ll see children playing very close to traffic and trash. During monsoon season it’s especially difficult for these families because their homes can’t stand up to the rain and we 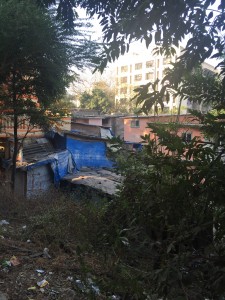 There are people who beg on the streets for money, or will sell goods on the streets such as coloring books. A TISS student told me that the women who are holding sleeping babies will give their child alcohol to make them sleep so they look peaceful as they beg for money. Those begging don’t get to keep the money and they usually have to give it to who they report to. I was told to give them food instead of money because at least then they can eat it and use for themselves.